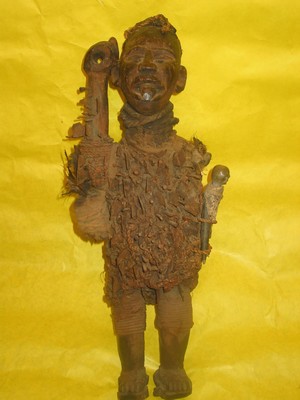 The Oath Taker Fetish Power Figure by Kongo peoples. Central African power figures are among the ubiquitous genres identified with African art. Conceived to house specific mystical forces, they were collaborative creations of a Kongo sculptor and a ritual specialist (nganga).

Kongo, also called Bakongo, group of Bantu-speaking peoples related through language and culture and dwelling along the Atlantic coast of Africa from Pointe-Noire, Congo (Brazzaville), in the north, to Luanda, Angola, in the south. In the east, their territory is limited by the Kwango River and in the northeast by Malebo (Stanley) Pool, in the Congo River. The Kongo thus live in Congo (Brazzaville), Congo (Kinshasa), and Angola

Dan Wainberg donated in the year 2003.