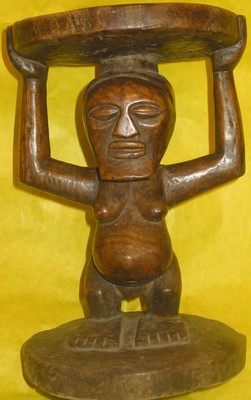 The main function of the stool was not to serve as a seat, but rather as a receptacle for the chief's spirit. Stools are such powerful emblems of a chief's power and identity that they were often kept secretly in a village different from their possessor's to reduce the risk of theft or desecration. The entire sculpture, carved of a single piece of softwood, is now covered with a lustrous patina, the result of multiple applications of oil to the stool's surface.

Songhai-Zarma people included the kings and warriors, the scribes, the artisans, the weavers, the hunters, the fishermen, the leather workers and hairdressers (Wanzam), and the domestic slaves (Horso, Bannye). Each caste reveres its own guardian spirit. The Kingdom of Songhai, or Songhay, developed from a community of fishermen who lived along the Niger River and were skilled canoeists. During the 9th century they became part of the state of Songhai and began trading with Muslim traders in Gao, which than became part of the kingdom.