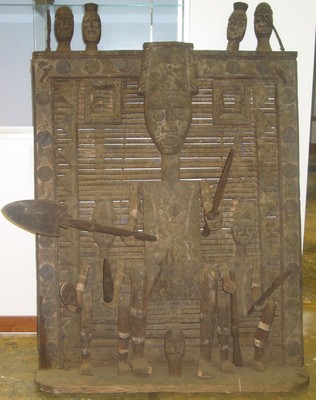 The Kalabari Ijo began creating ancestral screens during the nineteenth century as a way to honour, memorialise and communicate with deceased leaders of 'war canoe houses'. Called duein fubara (sometimes written as duen), the name of these memorials translates to 'forehead of the dead'. Its meaning originates from the Kalabari Ijo’s belief that the so, the fate that governs a person’s fortunes, resides in one’s forehead.

The Kalabari are a sub-group of the Ijaw people living in the eastern Niger Delta region of Nigeria. Originally, they were known as the Awome. The name Kalabari was derived from their ancestor Perebo Kalabari who was a son of Mein Owei. Their original settlement was spelt as Calabar by the Portuguese which was pronounced Kalabari.