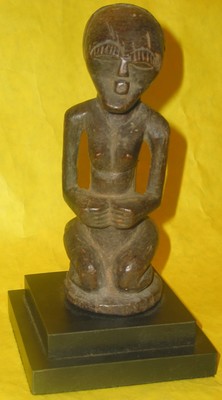 Seated female figures are usually shown with their legs tucked under them, their feet turned inward so that in the back their toes are touching.

Songhai-Zarma people have included the kings and warriors, the scribes, the artisans, the weavers, the hunters, the fishermen, the leather workers and hairdressers (Wanzam), and the domestic slaves (Horso, Bannye). Each caste reveres its own guardian spirit. The Kingdom of Songhai, or Songhay, developed from a community of fishermen who lived along the Niger River and were skilled canoeists. During the 9th century they became part of the state of Songhai and began trading with Muslim traders in Gao, which than became part of the kingdom.

Michael Wasserman donated in the year 2001.